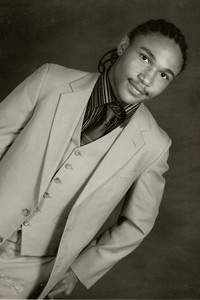 Jamil Wilson has loved the piano for as long as he can remember. He discovered his love of music at six years old when he first started playing tunes by ear on his grandmother’s grand piano. Being extremely interested in Jazz and R&B, he took up band at school and played the tenor and alto saxophone while still experimenting on the piano. In a short amount of time, he learned to play several impressive tunes on both instruments by listening to songs on the radio. After Jamil moved from his home town in Knox County to Columbus, he had to give up the saxophone which, although was heartbreaking, allowed him to focus more on learning to play the piano.

During the move, Jamil stayed with his grandmother and once again learned to play songs from the smooth jazz radio station until he and his family finally moved into their home. Fortunately, his family moved right down the street from the Whitney and Ventola music studio. Excited, he convinced his parents to let him take lessons outside of school. Under the guidance and supervision of his piano teacher, Annalisa Ventola, he was able to refine his repertoire as well as learning music theory, reading, technique and piano performance practices.

It wasn’t until much later in his freshman year of high school that he discovered his vocal talents. While auditioning for the musical Bye Bye Birdie his freshman year, the choir and music theory teacher at school was impressed with his singing abilities and cast him as the understudy for the leading male role. After the play, his teacher persuaded him to become a part of the school’s choir. Despite being unsure and nervous, Jamil joined the choir, and eventually became the tenor section leader of the group.

After being on stage numerous times and performing in a number of solos, duets, trios, quartets, he had finally found his calling. Now reveling in both singing and piano, it was only a matter of time before he would put them together. Jamil wrote his first song with singing and piano accompaniment, A Love Deferred (inspired by a Langston Hughes poem), sometime in his sophomore year. It was a huge hit…for his family, as well as some his teachers, who inspired him, gave him advice, and insisted that he do more. As time wore on, he composed many more piano arrangements as well as pop vocal scores. He has played numerous recital pieces sponsored by the Ventola and Whitney company, and performed as a solo vocalist for President Obama his visit to Fort Hayes High School in 2011.

Now as high school comes to a close and he continues his music studies at Cleveland State University, he would like to thank Ms. Annalisa Ventola his piano teacher, his school’s vocal teacher Mr. Daryl Flemming, as well as his mother Tamuve Wilson, father Elbert Wilson, his entire family, and especially his grandmother, Granny Cain who was one of the first to help him discover his love of music.